If you read our post earlier this month, you already know Colorado is becoming THE place for tech companies -- the “Silicon Mountain” actually. And, if the predictions are correct, the tech industry is only going to keep growing. Colorado’s tech industry is big on collaboration -- with events like the Colorado Tech Tour to help make Colorado tech companies the best in the nation, and the introduction of its own programs to ride the increasing technology wave.

This past May, Governor John Hickenlooper signed a bill that would allow students to graduate with a high school diploma and associate’s degree related to technology -- all in the same amount of time it would take to graduate high school in the traditional way. This program, Pathways in Technology Early College High School, or P-TECH, would enable more of the state to be prepared for the accumulating technology employment opportunities, especially those individuals who come from disadvantaged circumstances. In Colorado, one school will open with the P-TECH program for the 2016-2017 school year, with plans of opening more programs throughout the state over time. The students that recently graduated from the Brooklyn P-TECH are now poised to start 4-year college programs and STEM (science, technology, engineering, and math) careers. This is huge -- especially when most of these teens would have been without the opportunity to pursue degrees beyond their high school diploma.

Being able to gain knowledge and experience in STEM positions is an invaluable resource for emerging IT talent these days. OIT has even established its own program to develop the workforce -- Tomorrow’s Tech Talent, or T3. We bring in students and interns who gain real-world experience working with us, while we benefit from their fresh perspective and know-how with the newest technologies. It’s a win for the students, for us, and for Colorado’s economy. If you know any tech talent superstars who would be interested in our T3 program, contact us at oit_jobs@state.co.us.

Posted by Office of Information Technology at 9:13 AM No comments:

3D printing: What is it, how it works, and why should you care.


So maybe you’ve heard about 3D printing, maybe a friend of a friend got one, but what is it really? Remember the Star Trek replicator -- press a couple of buttons and anything your heart desires appears? For those of you who haven’t seen Star Trek, a 3D printer gives you the ability print a three-dimensional object very much the same way as you would print a document for work. For the home 3D printer this is typically plastic objects (think toys, replacement broken parts, new designs, yourself...anything really).

However, 3D printing is not just plastic objects; bakers are printing chocolate, home builders are experimenting with using giant 3D printers to print cement buildings -- the possibilities are endless. The technology works by printing a single layer of plastic, layer by layer, until you have a complete design. It’s very much like laying bricks to build a house.

So, why should YOU care?

This technology is completely redefining several industries -- manufacturing, art, custom design, and more. For example, if you had an amazing idea five years ago, it would have taken tens of thousands of dollars and multiple months (maybe years) to see a real world example of that idea that you could actually hold, touch, and test. Make a mistake or don’t like the design? Start all over from scratch.This was completely unaffordable for the average American. Now for the price a 3D printer you can see, touch, and use an object within hours. If you don’t like the 3D print, make a modification and reprint -- just like your book report in high school. This technology is empowering the average person to create like never before.

Ok, you’re not into manufacturing and you’re not a designer, should you still care?

3D printers are endless hours of fun for the average family. There are thousands, maybe millions, of designs and things already created that you can download and print off the Internet. The average person can start printing as soon as they unbox their new 3D printer. My brother-in-law and I spend hours (seriously...hours) mesmerized with my 3D printer. Watching the first couple of prints was like how watching your first TV show must have been -- it’s like nothing you have seen before to watch something appear out of nothing. My eight-year-old son is already designing 3D objects and learning what works and what doesn’t. I couldn’t have imagined this possibility or the value to his education even three years ago.

Let’s get to the important question, what have I printed on my 3D printer?

First was the X-wing starfighter (had to, obviously); then I printed guitar wall hangers, iphone cases, printable jewelry for my sister, plastic pieces for my car, my kid’s pinewood derby car (his design, legal, and yes it won first place). Again, the possibilities are endless.

In conclusion, should you go buy one?!
My wife was skeptical of the 3D printer purchase -- not all of my technology toys have been worth the money. She actually made me sell my Google glasses to pay for it. And yet, she has been the most surprising advocate of this technology and thinks it's been the best technology investment we have made in the last five years. For me, that’s really saying something. I’m a techno geek, and I’m willing to walk the bleeding edge of technology and deal with all the failure that can come with it. If you need your technology purchases to just be for function only, like a microwave or a refrigerator, you probably need to wait one or two more years before making the jump to a 3D printer. That said, if you’re a brave adventurer willing to test the waters before anybody else, now is the time. Printers range in cost from $400 (build your own) to $2,000 for a best-in-class consumer model. Watch a few videos on YouTube or go down to your electronics superstore and check out a 3D printer firsthand.

Posted by Office of Information Technology at 9:50 AM No comments:

Go on tour with your fellow “geeks”

Today is national Embrace Your Geekness Day (true story), and so we thought we would talk about Colorado’s awesome advancement of its geekness. If you didn’t know already, Colorado is THE place for tech -- the perfect home for geeks.

We continue to grow as a tech leader, with 11.3 percent of Colorado’s GDP coming from the technology sector last year. The state’s broad scope in technologies -- from outdoor tech to software development -- lets each “geek” find their niche and allows companies to meet growing technology demands.

That’s why I’m so excited that our friends at the Colorado Technology Association (CTA) are giving tech from all parts of the state an opportunity to gather and learn. They are hosting the Colorado Tech Tour -- with happy hour events taking place July 20-24 -- where we can come together and gain insights on how to continue to advance Colorado local economies.

With our large concentration of tech workers (aka amazing geeks), collaboration is key for Colorado to grab the top technology spot. And we definitely are a top contender: Colorado is one of the top 10 places to work for STEM graduates, has the fastest growing economy in the nation, and has 4 cities in the top 10 spots for tech start-ups.

The upcoming Colorado Tech Tour is an excellent opportunity to demonstrate the wide-ranging tech expertise that this state offers, and will allow us all a way to meet and find solutions to common struggles. It’s a snapshot of the growing and versatile tech industry in this state -- RSVP if you’re interested in meeting your fellow “geeks” for cocktails (tech-tails...?!) at one of these free evening happy hours: Telluride, Grand Junction, Frisco, Colorado Springs, and Fort Collins. 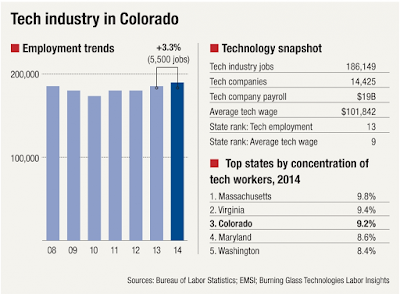 Posted by Office of Information Technology at 9:39 AM 1 comment:

Improving the lives of Coloradans is a mission that state employees take very seriously, and it is a commitment that starts at the top. Governor Hickenlooper challenged Colorado earlier this year to commit 10,000 random acts of kindness. Schools, businesses, and individuals have been asked to lend a helping hand to someone else and to share these acts of kindness on social media using the hashtag #StateOfKind.

The Governor’s Office of Information Technology (OIT) strives to make life easier for all citizens of Colorado, and we’re thrilled to take part in this campaign. One recent example is the creation of real time eligibility for Medicaid applicants. This was a team effort between OIT, Health Care Policy and Financing (HCPF), and private partnerships. The result? An average of 16,000 applications per month are now being processed in real time. That means the application process is being trimmed down from 45 days to 45 minutes. Once the system determines a client is eligible for Medicaid, the client can often immediately obtain a medical card and start accessing health care through authorized providers. That is life changing for many people who have long-ignored, serious health problems.

Another revolutionary project at OIT to improve the health and safety of the state is the FirstNet Colorado initiative. The goal of this initiative is to launch the first public safety broadband network and provide emergency responders -- the heroes of our communities -- with a dedicated, nationwide, high-speed data network. When launched, FirstNet would help 5.4 million rescuers effectively respond across 3.8 million square feet of land nationally. This is especially important for aiding people during emergencies in isolated areas. FirstNet has the potential to exponentially increase collaboration to help emergency responders save more lives, solve more crimes, and keep our communities safer. Colorado is at the leading edge of this effort and, through the Adams County Communications Center, Inc. (ADCOM 911), deployed the first operational public safety LTE pilot network.

Over the past year, the OIT team has shown why we truly are the #StateOfKind. We have become increasingly engaged and customer-focused, and I could not be more proud of our work. Here is my #StateOfKind Facebook post in appreciation of all they do.

So help Governor Hickenlooper reach his goal of 10,000 acts of kindness in Colorado: Post your own #StateofKind thoughts on Facebook or Twitter -- or reshare or retweet one of ours.

Posted by Office of Information Technology at 9:46 AM No comments: