On point with PEAK: IT helping Coloradans in need

It is clear that Colorado’s health, wellness and economic security landscape is changing. Our OIT teams work every day to maintain and enhance the systems necessary to support these changes.

Two essential technologies for the state of Colorado, the Colorado Benefits Management System (CBMS) rules engine and the Program Application & Eligibility Kit (PEAK) online portal, enable residents who are most in need to screen and apply for food, cash, and medical assistance, as well as childcare, and early childhood programs. These critical systems have seen tremendous growth and success in recent years with the implementation of the Affordable Care Act and an increase in demand for public benefits.

The infographic below characterizes the impressive growth that PEAK accomplished over the last year. From 2014 to 2015, there was a 45 percent uptick in applications submitted through PEAK. This translates to a huge benefit for our county partners, alleviating a substantial portion of their demanding workload. It also means that Coloradans who may not otherwise be able to apply for benefits, because of geographic or physical limitations, can visit Colorado.gov/PEAK to apply for programs from the comfort of their own homes.

In addition to the PEAK achievements depicted in the illustration, CBMS (the statewide database through which all food, cash and medical assistance applications and eligibility determinations are processed) realized some extraordinary year-end accomplishments as well. By December 2015, the CBMS database size reached 5.5 terabytes and housed more than 700 pages and 8.5 million lines of code! This system, which now has 4,600 registered users, also sent more than 12 million pieces of correspondence to Coloradans last year.

The OIT CBMS/PEAK team has learned to be lean and efficient as state and federal requirements require constant system modifications. We will continue to enhance these systems that impact more than a million Coloradans and are honored and privileged to serve alongside all of the hard working individuals that make a difference in the lives of others. 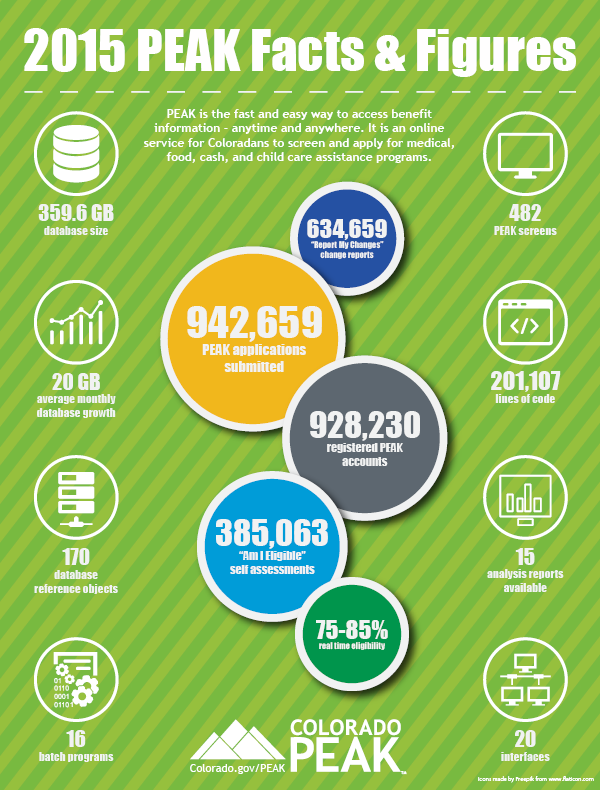 Posted by Office of Information Technology at 9:10 AM No comments:

A communication system for important people (or, how the magic happens)

Sometimes we just don’t know how things work. Why is ice slippery? Why can’t anyone seem to eat six saltines in 60 seconds? How do you solve a Rubik’s cube? This is ok, we can’t be experts in everything (but seriously, someone tell me how to solve this Rubik’s Cube...). But now and then it’s nice to learn how the magic happens on something you never took the time to Google, and so today let’s learn about how really important people (who help other people) communicate with other really important people (who help other people) in the state of Colorado.

Wildfires, floods, avalanches, blizzards...these are some of the not-so-great things that occur in our great state of Colorado. State patrol, firefighters, medics, snowplow drivers...these are the people who help us when those not-so-great things happen. How do they help, rescue, heal us? They do it by coordinating and communicating with each other. One of the critical tools they use for coordination and communications is a monumentally important two-way radio system maintained by the Governor’s Office of Information Technology (OIT) Public Safety Communications Network (PSCN), called the Colorado Statewide Digital Trunked Radio System (DTRS).

In the early 1990s, Colorado set out to replace the multiple, disparate, wireless communications systems operated by state and local governmental agencies. In partnership with local municipal, county, tribal, state and federal governmental agencies, this shared radio system was created for the specific use of all public safety, public service and other governmental agencies. DTRS provides a near seamless statewide wireless system for direct communications between the people who need to communicate during daily and emergency incidents. This means that a firefighter can radio another firefighter during a wildfire on a secure channel without having to compete with the voice network you use to call your girlfriend and listen to each other breathe at night.

This system was designed for, and is completely dedicated to, our state’s first responders. In fact, OIT’s PSCN team maintains the DTRS at the industry standard “Rule of Five-Nines,” meaning the system must be up, running and available to first responders 99.999 percent of the time -- now that’s a high standard.

The numbers are so impressive with this statewide system that it’s really fun to show you with bright colors and graphics, so check out our 2016 DTRS infographic below:

Posted by Office of Information Technology at 7:00 AM 1 comment: